In 2017 the CREDENTIAL consortium members participated in more than 40 events, with high profile conferences and workshops, and industry events among them. In the following we take a look back at some of the 2017 events which gave the opportunity to the CREDENTIAL partners to communicate the project results and interact with a diverse audience, and contribute to a successful project year.

The 12th International IFIP Summer School on Privacy and Identity Management was hosted by the Joint Research Centre (JRC) of the European Commission and its Cyber and Digital Citizen Security Unit. The summer school takes a holistic approach to society and technology, and supports interdisciplinary exchange through keynotes, lectures, tutorials, workshops, and research paper presentations, in order to bring together experts with societal, political, ethical, anthropological, philosophical, or psychological backgrounds.
Together with our liaison project PRISMACLOUD, CREDENTIAL organized a two-hour session on “Secure and Privacy-Friendly Storage and Data Processing in the Cloud”. The workshop started with introductory talks to the topic and the projects, and was followed by demonstrations of the developed solutions. For this, multiple stands were put up, where specifically for CREDENTIAL, the workshop participants were able to get hands-on experience and to directly interact with, and provide feedback to, the developers and pilot partners. Finally, the workshop was closed by a panel discussion with highly recognized IT security experts like Charles Raab or Anja Lehmann.

SECPID 2017 - 2nd Workshop on Security, Privacy, and Identity Management in the Cloud 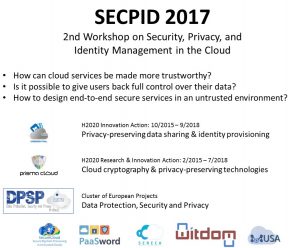 After the success of the previous year, CREDENTIAL and its liaison project PRISMACLOUD decided to again organize a SECPID workshop on security, privacy, an d identity management in the cloud, which was held in conjunction with the 12th ARES Conference in southern Italy. To gain more attention and attract more submissions, the DPSP cluster supported the workshop.

After an open call for papers, eight papers were accepted for presentation at the workshop and inclusion into the proceedings, which were published by the ACM. In particular, papers coming from the following H2020 projects were accepted: CREDENTIAL, MUSA, NEXTLEAP, PaaSWord, PRISMACLOUD, and WITDOM. Each presentation at SECPID 2017 was followed by a vivid discussion by the audience.
Besides the SECPID workshop itself, CREDENTIAL was also presented at the co-located CITE workshop organized by the H2020 projects ARIES and LIGHTest. 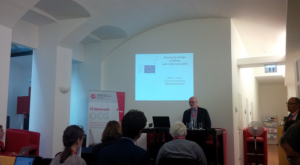 Subsequently to our Advisory Board meeting, the 5th Annual Privacy Forum (APF), co-located with the 4th Internet Privacy Engineering Network (IPEN) Workshop organized by the European Data Protection Supervisor, took place at the University of Vienna. To increase the visibility of CREDENTIAL and because of the tight link of the workshops’ goals and our project’s ambition, the consortium financially supported the organizers, thereby enabling the first online life stream for both events.

The participants of both events included experts from the domains of data protection, law, IT security, as well as policy makers and industry representatives. CREDENTIAL’s coordinator was invited as a panellist on the topic “Lawful interception and PETs”. Furthermore, the project gained visibility through the participation of multiple project members, numerous discussions with other participants, or the distribution of marketing material. 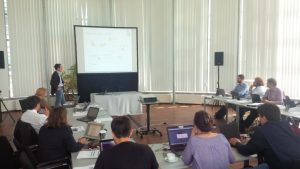 The discussions were mainly centered around legal and usability aspects of the developed pilots, as well as technical challenges related to metadata that could potentially be leaked to the CREDENTIAL Wallet and to service providers. All feedback was carefully evaluated by the project consortium and will be taken into account in the future development and revisions of the CREDENTIAL architecture. 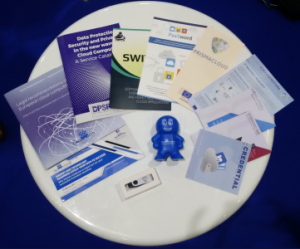 The CREDENTIAL project, together with seven other EU funded projects and under the umbrella of the DPSP cluster on Data Protection, Security and Privacy in the cloud, organized a shared stand at the Cloud Security Expo in London. This annual industry exhibition is co-located with the “Cloud Expo Europe”, the “Big Data World”, the “Smart IoT London”, and the “Data Centre World”. The overall event was attended by approximately 20’000 visitors, including large numbers of CISOs, Heads of IT Security, Cloud Architects, and thousands of security professionals. The event helped CREDENTIAL and all other participating projects to raise awareness of their solutions, to demonstrate the capabilities of European research and innovation projects in general, and to gain better insights into the concrete needs of potential customers ranging from SMEs up to global industry players.